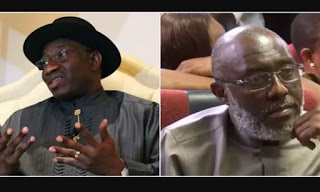 Justice Okong Abang of the Federal High Court sitting in Abuja has directed the court bailiff to serve the former President, Goodluck Jonathan with a summon within five days.
Justice Abang ordered the prosecution to persuade the Department of State Security (DSS) to produce the former National Security Adviser, Colonel Sambo Dasuki in court at the next trial which is October 31, 2017.
According to the judge, it will enable the summoned witness to appear in court to testify at the instance of Mr Metuh.