President Muhammadu Buhari yesterday said that his government has been fair to the South East geo-political zone in terms of appointments which he said were evidenced in the allocation of four prominent ministerial positions to the zone.
The President also assured leaders from the zone that his administration will benefit them more from roads and coastal rail projects, which he said were of critical importance to the economy. 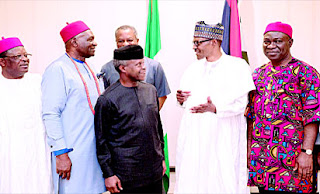