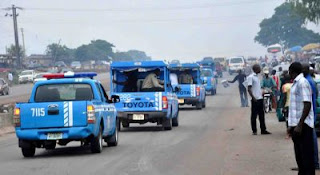 Federal Road Safety Corps vehicles
The Lagos State Sector Command, Federal Road Safety Corps (FRSC) says it has commenced operation “Show Your Licence’’ across the state to arrest drivers without valid licence and curb road crashes.
Mr Hyginus Omeje, the State Sector commander, said this in an interview with the News Agency of Nigeria (NAN) in Lagos on Thursday.
“The state command, this week, inaugurated operation ‘Show your License’ campaign across the state to arrest motorists who had no valid driving license.
“We are doing this as part of our ember month programmes to sensitise drivers on the need to possess valid licences before driving,’’ he said.
Omeje said that the state command recorded 57 road crashes in the third quarter of 2017, adding that the development showed a decrease of 46.2 per cent, compared to the same period in 2016.
According to him, there are 55, 802 unclaimed licences in the sector command due to the failure of many drivers to claim such documents.
Omeje noted that enforcement of speed limiters had brought tremendous reduction in road accident across the state.
The sector commander who said all commercial fleet operators must to install the speed limit device in their vehicles, noted that compliance level had reached 33.1 per cent in the state.
Omeje said that personnel of the command, on patrol, stopped 6, 007 vehicles in the last three months, adding that out of the number, 1, 993 vehicles had had the device installed.
According to him, 4,014 vehicles without the device and others motorists are booked.
According to him, another 192 motorists were cautioned while seven motorists were charged to court for allegedly failing to install speed limiter.
Omeje also said that there was plan to equip all the patrol vehicles in the state with breathalyzers to detect motorists, especially the commercial ones driving under the influence of alcohol.
Reactions: