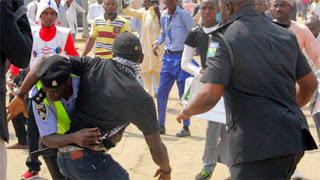 Man in combat with policeman
Already the police inspector who reportedly led other policemen to mount an illegal road block along Amusigbo, along the Ajowa/ ldoani road in Ose council area of the state is in detention.
Police Image maker Femi Joseph confirmed that the police Inspector would undergo orderly room trial for the alleged offence of shooting the victims.
Although Joseph said the inspector shot at the victims after they mobilised some youths to attack them at a stop and search point.
Joseph said that the victims were stopped by the policemen but they refused and that one of the policemen hit one of the victims with his baton only for them to go into the town to mobilise youths who attacked them.
He said that while they wrestle the service gun from the Inspector, it exploded and wounded the victims and hell was let loose thereafter.