We Are Running A Corrupt System – Osinbajo Opens Up 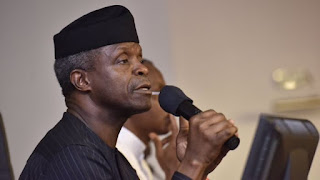 Vice President Yemi Osinbajo has said the major bane of development in Nigeria is corruption, not the one perpetrated by politicians alone, but in collaboration with the elite and religious leaders.
Speaking against the backdrop the agitation for the restructuring of Nigeria has taken in the last couple of years, Osinbajo asked “how many Christian leaders stood up to complain” when there was rampant corruption that crippled Nigeria.
Speaking yesterday in Lagos at the Greater Nigeria Pastors Conference, themed, “Towards a Better Nigeria, the Role of the Church,” convened by the Senior Pastor and Founder of Foundation of Truth Assembly (FOTA), Rev. Abayomi Kasali, Osinbajo insisted that no nation could have survived the kind of corruption Nigeria went through in the recent times.
“It is my view that the Nigerian elite, religious leaders and politicians think alike when it comes to corruption and they were always very selfish, playing religious and ethnic cards when it pleases them,” he said.
Osinbajo added the high level of corruption in the country has no ethnic or religious colouration, saying: “Our elite and politicians are united when it comes to corruption. I have never seen a situation where an Igbo, Yoruba, Hausa and other tribes joined hands to steal money and argued about it.”
The vice president, therefore, said to build a new nation, there is the need to raise men and women of integrity.
While expressing confidence that Nigeria would take a new turn in the next few years, Osinbajo challenged the leadership of the church to eschew religious and ethnic sentiments in their approach to the issue of Nigeria, wondering: “Why can’t we have Christian agenda based on the principle of the Bible, as the Lord Jesus Christ teaches?
“The church must begin the process of uniting Nigeria by uniting itself. What Nigeria needs to survive are already contained in the Bible. We cannot practise two gospels. The reason the country is what it is today is because we (Christians) care to practise what the Bible teaches.”
He also debunked the sentiments that killings by herdsmen escalated when Muhammadu Buhari, who is a Fulani, became President, insisting: “The Fulani herdsmen crisis became rampant as far back as 1996 and it took a devastating effect in 2014 during the Libya crisis.”
On agitation for restructuring, Osinbajo said the problem with the demand was that there is yet to be any concrete agreement even among those championing the cause, noting that what the manifestoes of the ruling All Progressives Congress (APC) says is devolution of powers, which he subscribes to.
He charged church leaders to henceforth begging to speak for the sanctity of human lives and not necessarily emphasising that religious extremists were killing Christians or southerners.