Proscribed pro- Biafra group , the Indigenous People of Biafra ( IPOB) has announced the declaration of 21 days mourning for its members who allegedly died during the military invasion of the home of its leader , Nnamdi Kanu , at Afara Ukwu , Umuahia, Abia State 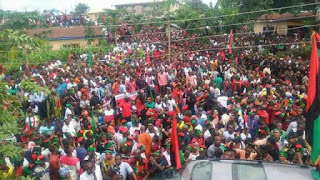 The group also said it has discovered more corpses of slain members in a bush within the precincts of Kanu’s home , adding it is burying the slain members , numbering more than over 28 who were killed during the invasion , with 11 of such bodies already interred .
Speaking in Aba, an IPOB chieftain , Mark Eze Ofuonye alleged the members were shot dead by the invading soldiers, and their corpses dumped in a bush .
According to him, “ Some of our members , numbering over 28 , were murdered in cold blood by the military during the invasion of our leader ’ s home at Afara Ukwu . The soldiers were doing a sort of mop up operation; whenever they killed any of our members , they carried away the corpse to conceal their horrendous act but it was not possible .
“ So , they filled up their trucks with our members ’ corpses. The corpses we retrieved and which we are burying at present are those the soldiers could not carry . They just came with the intention of killing any human being or living thing that was found in the compound of our leader .
“ The people they met were not armed still they shot them, even people just standing nearby and those passing through the area were caught in the attack .